There are many chiropractors to choose from in Oakland.  Obviously, experience and skill matter a great deal, but when all else is equal and really it comes down to it, wouldn’t you rather see someone in your own community?  We’ve put together our list of reasons why you’d want to choose a queer chiropractor in Oakland.  Check it out below, and please get in touch if you have any questions.

10 reasons to visit a queer chiropractor in Oakland:

1.  You may not be straight, but we can help you keep your spine straight.

2.  We will ask you about your preferred gender pronouns.

3.  We won’t make assumptions about how you carry stress in your body.

4.  We don’t judge your lifestyle or your activities.

6.  Our skilled chiropractic and manual therapy treatments help alleviate the tension of being chronically oppressed.

7.  Our intake forms ask for your pronouns, and then the doctor honors them and uses them correctly.

8.  Our community appreciates all body types, we have sturdy tables and flexible minds in our treatment rooms.

9.  Supporting one another’s businesses is a responsibility and a privilege of being in the gay community.

10.  Queer chiropractors in Oakland have the cutest haircuts : )

Alright, so some of these are pretty silly.  But we think you get the point.  Keeping business in the community helps build everyone up and create a stronger family.  We’d love it if you’d consider us for your chiropractic and manual therapy needs here in Oakland. 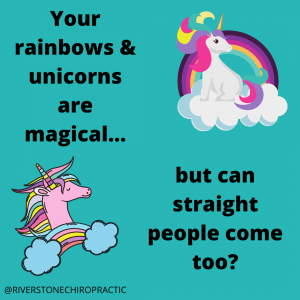 We were featured in this thoughtful article on OaklandNorth:

…Sandy Baird opened up Riverstone Chiropractic, the first LGBTQ-focused chiropractic studio in Oakland. Up until two years ago, Baird, who identifies as non-binary and goes by they/them pronouns, focused on treating sports injuries and back pain for the general population.

When Baird graduated from chiropractic school five years ago, they said, nobody saw the need for a queer specialty. “My own marketing person didn’t think I needed to put LGBTQ on my fliers,” Baird said. “I still kick myself because the photo on the front was this white, straight-looking lady with a blond child on her hip.”

But in 2017, Baird decided to host a workshop at the LGBTQ Community Center in Oakland called “Open up Your Chest, For Butches.” It was the first workshop in the city specifically geared towards teaching transmasculine people how to alleviate neck and chest pain caused by binding, a technique that uses fabric to compress a person’s chest, getting rid of the appearance of breasts. The practice is considered gender-affirming, but the compression of the ribs and lungs can be painful and can impair breathing.

At the workshop, Baird demonstrated breathing exercises and foam rolling techniques to show people how to stretch the shoulder and trapezius muscles constricted by binding, and then released YouTube videos and an e-book reviewing these techniques online.

“For so many people, it was the first time they’d heard solutions that made sense,” Baird said. Participants told Baird they’d felt uncomfortable bringing up binding with their doctors. And for the few that had, Baird recalled, doctors had been dismissive, telling them to take their binders off for a few days at a time. But that suggestion doesn’t fully take into account the way in which gender dysphoria, or feeling a disconnect between your gender identity and your biological sex assigned at birth, affects mental health. “You just have to realize why people are wearing binders in the first place. We’re not wearing it for fun,” Baird said.

After the workshop, Baird began doing everything they could to make their practice explicitly inclusive, like advertising that the clinic uses gender-neutral intake forms and posting binding tips on their blog…

What Other People Just Like You Are Saying About Riverstone Chiropractic In Oakland... 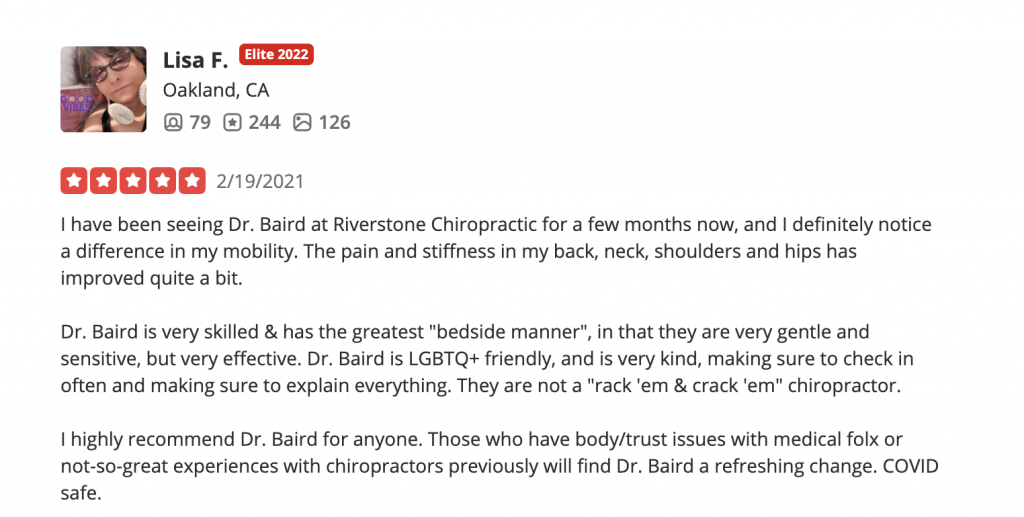 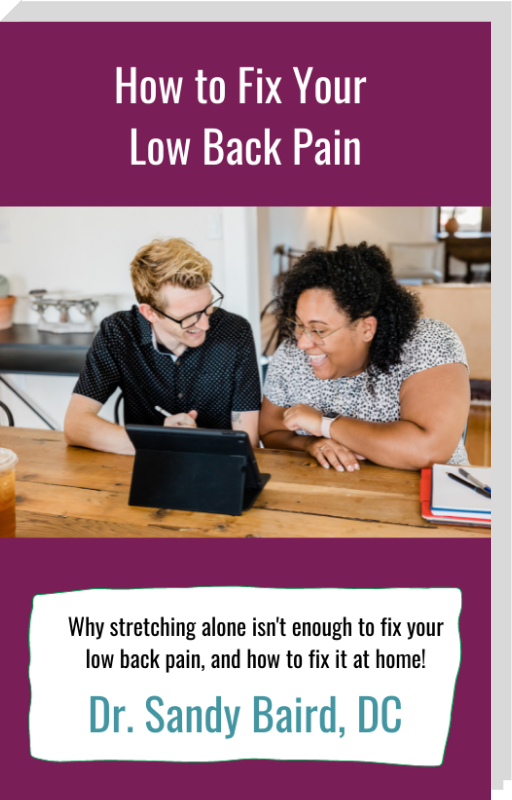 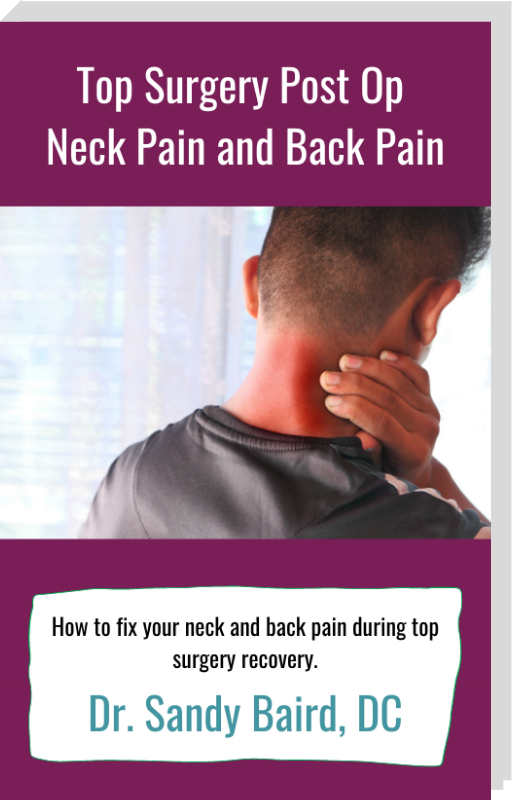 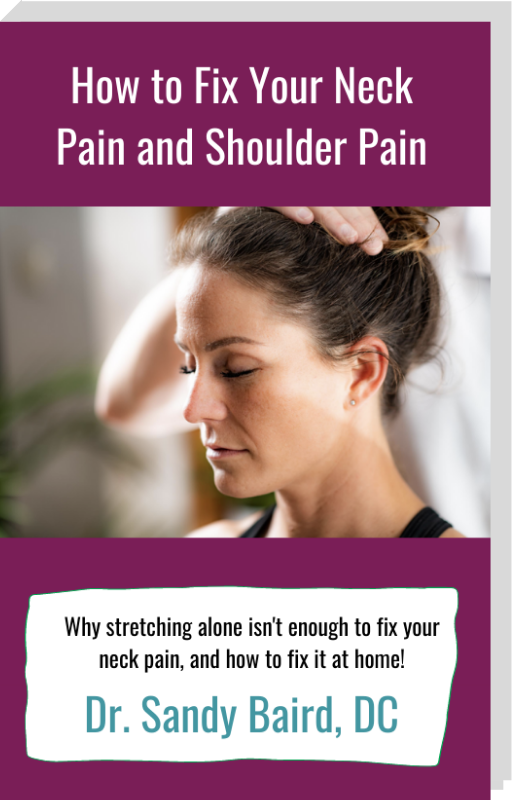 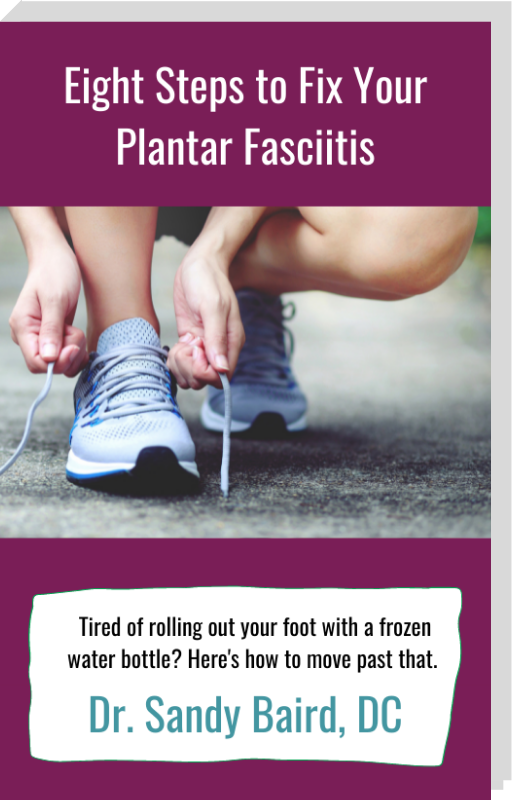 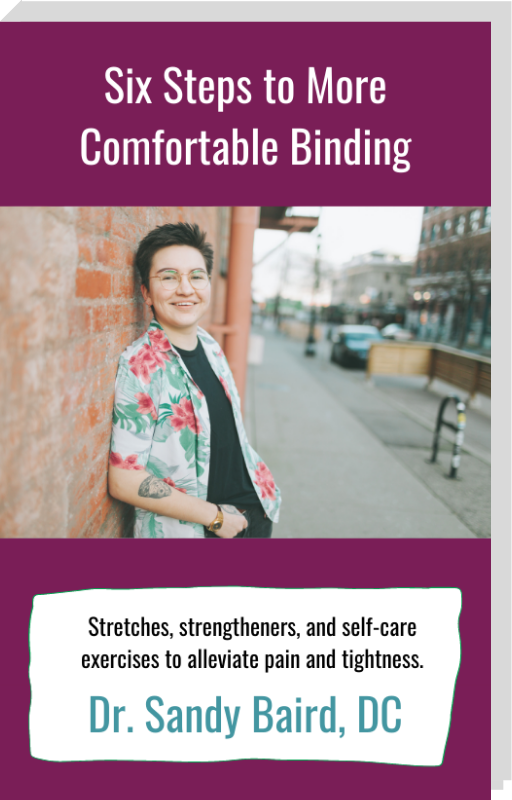 Learn more >
Free Consultation
Free Consultation
We use cookies on our website to give you the most relevant experience by remembering your preferences and repeat visits. By clicking “Accept”, you consent to the use of ALL the cookies.
Do not sell my personal information.
Cookie SettingsAccept
Manage consent

This website uses cookies to improve your experience while you navigate through the website. Out of these, the cookies that are categorized as necessary are stored on your browser as they are essential for the working of basic functionalities of the website. We also use third-party cookies that help us analyze and understand how you use this website. These cookies will be stored in your browser only with your consent. You also have the option to opt-out of these cookies. But opting out of some of these cookies may affect your browsing experience.
Necessary Always Enabled
Necessary cookies are absolutely essential for the website to function properly. These cookies ensure basic functionalities and security features of the website, anonymously.
Functional
Functional cookies help to perform certain functionalities like sharing the content of the website on social media platforms, collect feedbacks, and other third-party features.
Performance
Performance cookies are used to understand and analyze the key performance indexes of the website which helps in delivering a better user experience for the visitors.
Analytics
Analytical cookies are used to understand how visitors interact with the website. These cookies help provide information on metrics the number of visitors, bounce rate, traffic source, etc.
Advertisement
Advertisement cookies are used to provide visitors with relevant ads and marketing campaigns. These cookies track visitors across websites and collect information to provide customized ads.
Others
Other uncategorized cookies are those that are being analyzed and have not been classified into a category as yet.
SAVE & ACCEPT
Powered by